Our uniqueness as historical falconers has led to many an interesting film job. We are particularly useful to historical documentary makers who need falconers that possess the right knowledge and all the correct props. That's us! Most of the time we are required to demonstrate flying and hunting either as a background piece or as part of a larger staged scene, we are very experienced and confident talking to camera and can always assist camera crew with achieving the best possible shots. However sometimes it is only the birds that are required filmed in flight or to be handled by an actor. Whatever your angle we are pretty sure we can deliver the goods as we have a wealth of experience in this field.

Mounted falconry is a particular field of specialism of ours, by that we mean the carrying, releasing and flying of falcons from horseback. Nearly all "noble" historic hawking was conducted from the saddle so for those directors wishing to achieve a truly authentic scene there is no better recreation style. We have worked for many years with a variety of equestrian professionals and are extremely proud to possess a team of horse-trained falcons and hawks and experienced riders who can ride both astride and side saddle.

Often literary authors and production companies want nothing more than information whether that be research material, cross referencing, authentication or recommendations. We are happy to provide consultation where we can so that you get it right. We give general information out for free so any reference already in the public realm will be gladly shared or explained. We are even happy to undertake a little specific research for you to get you started. If you require physical assistance that of course comes at a cost!

We price every job on its own merits so give us a call or drop us an email to discuss how we can help you complete your project.

ALAN PARTRIDGE TALKS BACK
A comedy sketch filmed in Mr Partridge's radio studio involving a lady falconer actress with kestrel.
WARRIOR SCHOOL
A Lion TV production for Channel 5 about the training of a medieval knight filmed at a Yorkshire castle.
THE WITCHFINDER GENERAL
Filmed for Channel 4 in a muddy field in Essex and about C16th witchhunters. We provided a macabre scene of a falcon catching a (fake) rook and devouring it to camera.
TIME TEAM
3 days spent filming at Chenies Manor in 2004 to train presenter Carenza to fly a peregrine falcon at a Tudor hunting lodge. It is one of the most frequently repeated episodes of the entire series collection.
THE PAUL O'GRADY SHOW
We were the special challenge for one of Paul's regular families who spent an afternoon with us flying birds at a stately home.
A NORFOLK WOODLAND
A short natural history documentary filmed for BBC2. We supplied a Tawny Owl for close-up shots and had to train her to fly in and out of a nest hole in a tree.
INSIDE THE HOMES OF HENRY VIII
A History Channel documentary filmed at Hampton Court Palace. We demonstrated the sport of falconry in the hunting park and set up a fabulous recreation of a pheasant hunt.
GOING MEDIEVAL
A Lion TV documentary produced for the American H2 Channel. We supplied falcons specially trained to fly from horseback to simulate a mounted medieval falconry hunt.
LE TEMPS VIENDRA
An historical novel about Anne Boleyn written by Sarah Morris. The book contains detailed descriptions of hawking and hunting in Tudor times with which we assisted.
TUDOR MONASTERY FARM
The latest in the BBC2 historic farm series based at the Weald and Down Museum which aired on New Year's eve in 2013. We contributed to the Christmas Special demonstrating hunting and hawking for feast days, hood making and ancient training techniques with lures and medicinal remedies.
Ubisoft Games - Title still in production
In June 2018 we were commissioned to work with Mike Loades and Lion TV to film on a secret project for a major international games company. That project is still in production and details of it remain secret until release. 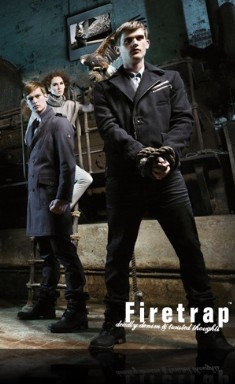 We are regularly asked to provide still and moving shots for commercial photographers and marketing companies. These pictures go on to be used for various promotional projects like product launches and personal portfolios. We have appeared in several lifestyle magazines like House Beautiful and Heritage Today and have helped create artistic shots for Image-M, Spiderwood Images and individual photography stylists. Our most unusual request was to supply 'mean looking birds' for a fashion shoot at an old pumping station in London to launch the new Firetrap jeans wear range. We have also stood knee deep in mud on a Norfolk field for a winter bridal shoot. We feature every year in goodness knows how many promotional brochures produced by English Heritage and The National Trust.

We are frequently asked by photographers if they can tag along or visit us to capture our birds in flight, please respect that we are a commercial entity and our service is not free. Be aware that taking commercial photographs at all of the private venues we work at is not permitted unless you have written permission from both us and the host venue. We will happily stage a private day for you on request for a sensible fee. If you require the creation of an image for whatever purpose please get in touch to discuss how we can help.

Artwork, design and text are copyright of Emma Raphael 2014